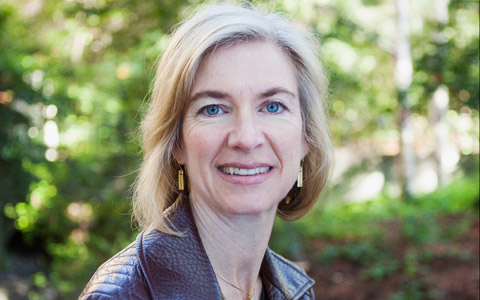 The Royal Netherlands Academy of Arts and Sciences has awarded the Dr H.P. Heineken Prize for Biochemistry and Biophysics 2016 to Jennifer Doudna, Professor of Biomedical Sciences at the University of California in Berkeley (United States).

Pioneering research laying the foundations for revolutions in modern biochemistry
Jennifer Doudna received the Dr H.P. Heineken Prize for Biochemistry and Biophysics for her pioneering research into the structure and functioning of RNA molecules and RNA protein complexes.
From the beginning of her career, Jennifer Doudna knew that knowledge of the structure of RNA molecules was essential in order to understand their catalytic effect. She therefore started analysing crystal structures of RNA molecules right at the outset of her studies.
At first, these were relatively simple molecules. However, in the mid-1990s, she made a daring but successful attempt to crystallise and analyse a much larger RNA molecule: the Tetrahymena ribozyme P4-P6 domain. For the first time, researchers learnt how a long, complex RNA strand folds itself into functional bends so as to interact with surrounding molecules.
Doudna is still a leading researcher in the rapidly expanding research field dealing with the functioning of RNA molecules and RNA protein complexes. Her work created the foundations for exciting developments at the forefront of biochemistry: RNA interference and CRISPR, a bacterial system of defence against invading DNA that can now be used to edit the DNA code of living organisms with the greatest possible precision.

Researcher
Jennifer Doudna was born in 1964 in Hawaii (US). She studied at Pomona College in Claremont, California, but after gaining a bachelor degree in chemistry, she relocated to Harvard University in Cambridge (Massachusetts). Under the supervision of Jack Szostak (who was later to win both the Dr H.P. Heineken Prize for Biochemistry and Biophysics (2008) and a Nobel Prize in Physiology or Medicine (2009)), she was awarded a doctorate in 1989 for research into ribosomes, DNA-creating structures at the centre of a cell.
In that same year, Doudna continued her research at the University of Colorado (in Boulder) together with Thomas Cech, who later also won both the Dr H.P. Heineken Prize for Biochemistry and Biophysics (1988) and a Nobel Prize in Chemistry (1989). In 1994, she was appointed assistant professor at Yale University. Three years later, she became an investigator at the prestigious Howard Hughes Medical Institute.
In 2002, Doudna was appointed Professor of Biochemistry and Molecular Biology at the University of California in Berkeley, where she still occupies a chair.
Jennifer Doudna is a member of the American National Academy of Sciences. She has been awarded many prizes, including the Paul Janssen Award for Biomedical Research in 2014, the Breakthrough Prize in Life Sciences in 2015 and in 2016 the L’Oréal-UNESCO For Women in Science Award and the Canada Gairdner International Award.
In 2020, Jennifer Doudna has been awarded the Nobel Prize in Chemistry, together with Emmanuelle Charpentier.

Jennifer Doudna, laureate of the Dr H.P. Heineken Prize for Biochemistry and Biophysics 2016

Introduction to the work of Jennifer Doudna, laureate of the Dr H.P. Heineken Prize for Biochemistry and Biophysics 2016