Art
In his unique, tragicomic style, Van Lieshout puts his finger on what ails society. His work never flags, continues to grow and is pure: he is not out to preach. He enters into dialogue with groups who others often give a wide berth: ghetto-dwellers, junkies, drifters, and right-wing or left-wing extremists. He raises questions about drugs, sex, violence and overregulation. There is no taboo or danger that Erik van Lieshout tries to avoid; on the contrary, he makes a beeline for them and tries to find a dialogue.

Artist
Erik van Lieshout (born in Deurne in 1968) lives and works in Rotterdam. He studied at the Academy of Art and Design in ‘s Hertogenbosch and Ateliers ’63 in Haarlem (1990-1992). His work consists of drawings, collages, sculptures and videos, often combined into multimedia installations. He always features in his own videos.
‘Erik van Lieshout explodes into our consciousness,’ was how one reviewer recently described Van Lieshout’s exhibition I am in Heaven (Anton Kern Gallery, 2015). As a Manifesta 10 artist (2014), he spent two months overhauling the basement of the Hermitage Museum in St Petersburg, along with the seventy or so stray cats that live there. He sketched and filmed the process. While it appears to document the overhaul, Van Lieshout’s film The Basement (2014) is really about Russia under Putin, gay rights, the seizure of the Crimea, censorship and Pussy Riot. This short film was projected in a 50-metre-long tunnel made of plywood and carpet and lined with copies of politically charged sketches and photographs of the cats in the basement. Clips of this work reappear in his longer film WORK (2015). Viewers are overwhelmed by a whirlwind of images, impressions, snippets of text, animations, crudely fashioned props, raw charcoal drawings and film images shot with a handheld camera that show Van Lieshout talking to himself and others about idealism, utopia, harsh reality and the position that an uncompromising artist tries to claim in all of it. His work can be found in Dutch and international private and museum collections, including the MoMa in New York. In 2003, he was selected to be the Dutch entry for the Venice Biennale. 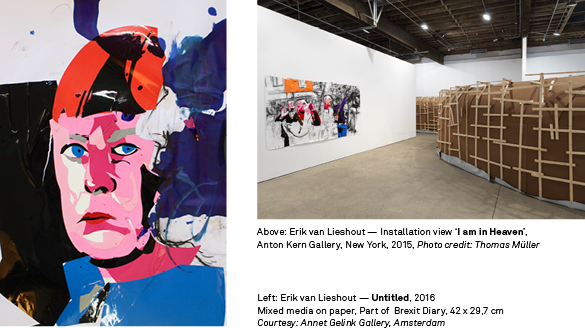 Introduction to the work of Erik van Lieshout, laureate of the Dr A.H. Heineken Prize for Art 2018